Meet Dug, the Iron Age man from Dorset. A dozen students have just been reconstructing his face from casts of his skull. I had terrible trouble with his ears. No wonder he looks wan and depressed. Or, as Husband describes him, spooky. 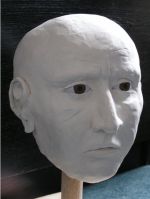 Still, he is a lot better-looking than he used to be: 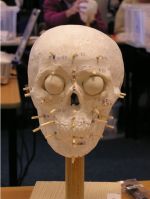 Photos of everyone’s reconstructions will be up on Martin Weaver’s site soon. Most of them look a lot happier than Dug. And there’s good news for all the people who’ve said, ‘Oh, I wish I’d known about that!’ – Martin’s hoping to run another course later in the year.

In the meantime Dug and I will be visiting libraries during April – dates are on the diary page. I’ll be doing the talking and he’ll glare at anyone who falls asleep. By that time he may have acquired some hair. I doubt it’ll cheer him up much, but at least it’ll do something to hide his ears.