The sun shone on Whitehall Roman Villa, the crowds turned up and the excellent Fourteenth Legion marched, charged, and fired something that might have been grapefruit at the enemy.

Some of the recruits who joined up to drill with the regulation wooden practice swords were alarmingly young. By the time they’ve completed their 25 years’ service they won’t be a day over 30.

Still, they’ll be well supplied with food and clothing by the ladies who accompany the legion: 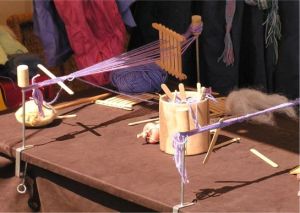 Their spiritual needs will be taken care of… 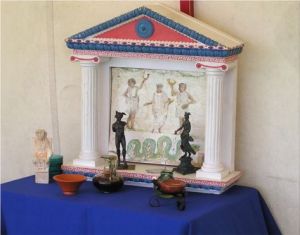 and should any of them feel poorly, they can always pop down to the camp hospital to visit the Medicus: 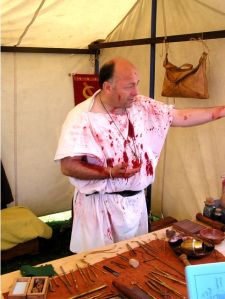 There’s more on Legio XIIII over at the Roman Military Research Society site including some pics of a full-size legion drilling at Corbridge. As one of the soldiers pointed out, the fact that many of the assembled legionaries didn’t share the same native language didn’t matter, because the orders were in Latin – a nice demonstration of how things must have worked back in the days of the Empire.

Open Day was a chance to meet loads of interesting people, including Doug Kemp, who’s one of the reviews editors for the Historical Novel Society. For geographical reasons the society meets largely on paper and in cyberspace, so it was great to be able to hold a real (if brief) conversation.

(Incidentally, by the end of the day even I became aware that I’d talked too much. I’m not sure at what stage I descended into gibberish, but apologies to anyone who was subjected to it, and to a couple of folk whom I should have recognised and didn’t.)

Meanwhile, back at the archaeology… few things gladden the heart of the digger more than the sight of a fine Roman drain. 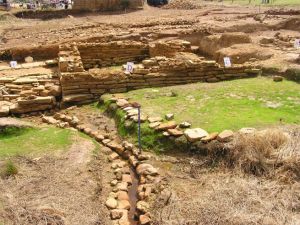 This was the last chance to see the lovely Bath House One before it’s reburied – sad but necessary, as it’s suffering damage from exposure to the weather.

Finally, when all the hoopla is over, the modern residents will return:

…and only now does it become clear that the title for this piece should have been ‘Friends, Romans and Countrymen.’