Just back from Cheltenham with a grubby tent, tired feet and overstimulated brain.  The Greenbelt festival was as fabulous as ever, and as usual packed with far too much to do. 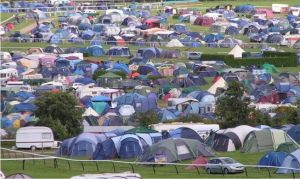 Blue is definitely the colour for tents this year.

Highlights for me included an early-morning ‘free food’ forage – no, not stealing from other people’s tents but a guided tour of some of the 40 or so edible plants growing wild around Cheltenham race course. Footage of the previous day’s forage can be seen here.

Then there was the chance to see Simon Mayo interview Douglas Alexander, the minister for Overseas Development. The Minister was leaving for an overseas trip that night and when the audience asked questions of the, ‘Don’t you think something should be done about…?’ nature it was a delight to hear, instead of the usual theorising and rhetoric, a simple, ‘I’ll be raising that with the Indian Government the day after tomorrow.’ 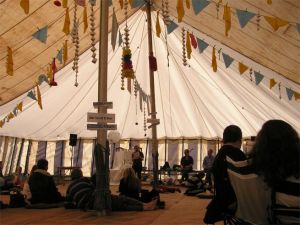 An event in The Kitchen, a venue appropriately decorated with j-cloths, dusters, rubber gloves, tea-bags and hot water bottles.

Some baffling programming meant that the two novelists I really wanted to hear were both scheduled to be talking at three o’clock yesterday. They were in different venues, obviously, but that wasn’t much help to those of us who can only be in one place at one time.

The brief pre-event interview I managed to catch with Jasper Fforde confirmed that he really is as funny as his novels suggest.  It’s clear from his reasoning that there really was a Fourth Bear in the Goldilocks story – if you don’t believe me, read the book.

Jon McGregor’s forthcoming novel certainly won’t be funny. It’s about the discovery of a neglected body in a decrepit flat, how it got there in the first place and what happens to it afterwards. Much stronger stuff than his award-winning debut If nobody speaks of remarkable things,  but to judge by the excerpt I heard, equally well worth reading.  It’s called Even the Dogs, and will be published in February. No, I’m not getting commission for this.

Another highlight was the chance to meet up again with the excellent Stuart Smith of 3 Sheep.  It’s amazing how much even the technically incompetent can learn in an hour with the help of someone who knows what he’s talking about, and any improvements and tidying-up you may notice on the blog are thanks to Stuart’s advice.

One final gem – I missed much of Andrew Tate’s talk on Epic Narrative but did manage to catch the sentence, ‘Postmodern is a term that’s used an awful lot but nobody really knows what it means.’

Thank goodness. It’s not just me, then.