Today we’re taking a brief excursion forward in time from the Romans, and I’m delighted to welcome a guest who not only writes marvellous novels, but is also in demand as a tutor to other writers.
Sarah Bower’s first novel, THE NEEDLE IN THE BLOOD, was Susan Hill’s Book of the Year in 2007. Her second, SINS OF THE HOUSE OF BORGIA, has just been published in the USA, so this seemed like the ideal time to invite her over for a chat.
I was curious not only about the Borgias, but about how Sarah finds the whole experience of writing.

Ruth, thanks so much for inviting me to share my thoughts on the Borgias and other mysteries of the novelist’s world with you and your readers. It’s some years now since our first encounter and a lot of bodies have flowed under a lot of bridges since then.

Me:
You did a creative writing MA, which I’m guessing involves opening your work up for feedback. Are you naturally someone who likes to discuss what they’re working on, trying out passages on friends and bouncing ideas off people, or do you find putting together a novel is a very private affair?

I found the MA an amazing experience. I had wonderful tutors, including the then Poet Laureate, Andrew Motion, and Michele Roberts, and masterclasses with Melvyn Bragg and Nell Dunn, among others. I also met some very talented writers and made my best writing buddy, with whom I go away most years to write a lot and drink not a little! That said, it was also very tough and, when my turn came round to be workshopped, I was usually terrified! Although I was part of several lively and creative writing groups when I started out, and am still nominally part of a group called Writers Without Walls which arose out of my time at UEA, I find I’m less inclined now to share work in progress than I used to be. I think this is because, the more you go on, the more self-critical you become so you dread anyone seeing anything unfinished except your agent or editor with whom you share the sanctity of the ‘confessional’. The one exception I would make is that I love discussing plot mechanics with people, my own and theirs. I find I can usually see how other writers can resolve difficulties with plot and vice versa. As a writer, you sometimes can’t see the wood for the trees in that respect and a fresh perspective is welcome. 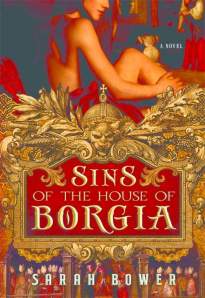 How do you feel when your novel goes public?

By that stage, I feel the book has ceased to be mine. Once cover designers, blurb writers and marketing people get in on the act, they transform your baby into a commodity for sale and, for me, that’s the best way to think about it, with a good dose of self-preserving detachment. I am, of course, also very proud. Only this morning, a friend who’s currently on holiday in New York posted on my Facebook wall to say she’d seen SINS OF THE HOUSE OF BORGIA on display in Barnes and Noble and I got very excited about that as I haven’t been published in the States before.

Do you read reviews?  If so, do you ever feel tempted to respond to them?

This is quite a topical question as I write, as there has been a lot of chatter on social networking sites surrounding an author I shan’t name who has seen fit to come back at a critical review with all guns blazing. This hasn’t made her popular but may, I suppose, sell more books. It wouldn’t be my way. I do read reviews, particularly those done by reviewers whose opinions I respect because I feel their criticism will help me to improve my craft. I do try to respond to good reviews that appear in blogs because blogs are more like a conversation than a magazine review, whether online or print, and I like to thank people for the kind things they say and the effort they’re making on my behalf.

What do you hope readers will especially enjoy about SINS OF THE HOUSE OF BORGIA?

I hope different readers will find different things in it. It’s a love story, but not a conventional one – as you can imagine, given how the Borgias led you into mixing up your Christmas and Halloween lanterns! It’s also very much a book about motherhood, which determines the lives of its central characters in quite forceful ways. I have included a certain amount of lurid Borgia mythology, especially the famous Chestnut Orgy, which really set a new standard for parties, I feel. Most of the novel, however, is set after Lucrezia Borgia’s third marriage, to Alfonso d’Este, when she put the scandals of her early life in Rome behind her. When thinking about how I wanted to approach the Borgias, I felt very strongly that a lot of other writers had covered that ground and done it so well I didn’t want to try to compete but find a different way into the story.

Readers who know you in the UK will have met the book under its British title, THE BOOK OF LOVE. What’s the thinking behind the change of title and cover for US readers, and is it exactly the same text inside, or did the American publisher suggest changes?

As Ian McEwan is reputed to have said when asked how he liked the movie version of Enduring Love, ‘I took the cheque. That’s all I have to say.’ Being a short story writer also, I know the value of titles when they contribute something to the understanding of a text of which they form a significant proportion. A novel title, however, is to my mind more of a marketing tool. It helps to categorise the work and give readers some idea what they’re getting. The title had already been changed by my German publisher to DAS SIEGEL DER BORGIA. So, while I wouldn’t have chosen the title myself, I’m prepared to admit that Sourcebooks’ very sharp and energetic publicity people know their market better than I do. There was also, I gather, some confusion with a novel already in circulation in the States called The Book of Love. I did wonder if readers might be disappointed when they looked between the luscious and lascivious covers and failed to find an orgy on every page, but so far I’ve been delighted by the response.

The text is almost exactly the same. The only editing I was asked to do was around certain grammatical usages and again, that was more to do with American convention than the sense of my original constructions. And the spelling has been changed, of course. I wasn’t asked to undertake any substantial edits, which was a relief.

The US publication coincides with the television series THE BORGIAS. Was that good luck, or good timing on the part of the publisher?  Any views you’d like to share on screen representations of the Borgias?

The coincidence with the new Fantasy TV series is mostly luck. I’ve had nothing to do with the making of that and it isn’t based on my novel. However, Sourcebooks had bought both my novels and quickly switched their publishing schedule when they heard about the TV show. They had planned to publish THE NEEDLE IN THE BLOOD this year and SINS OF THE HOUSE OF BORGIA in 2012 but now it’s going to be the other way round.

I’m looking forward hugely to seeing the TV show when it comes to the UK in July, though I’m also slightly apprehensive because I, too, remember the serial the BBC did in the 80s which has, justifiably, become a benchmark for everything you don’t do in period drama. It was impossible to take seriously and I feel the Borgias themselves, who all had great senses of humour, would have been rolling around in their graves clutching their sides with mirth. The trailers I’ve seen for the new one look much, much better. Apart from the gorgeous sets and costumes, and Jeremy Irons reprising his sinister inquisitor from the late, great Heath Ledger’s Casanova, the makers seem to have really captured the soap opera aspects of the Borgias’ lives. I remember when Gianni Versace died, watching Donatella in her very public grief and thinking, these two are just like a latterday Cesare and Lucrezia Borgia. When you read about Borgia parties, it’s not difficult to bring to mind, for example, the Beckham wedding – or an afternoon by the pool with Charlie Sheen. This is a huge part of the Borgias’ attraction for modern audiences and I’m looking forward to seeing it played to the hilt.

What’s one thing you’ve learned that you’d like to pass on to aspiring novelists?

Persevere, and never get complacent. If you ever think anything you write is good enough, then it won’t be. Writing a novel is very hard work and, as Michele Roberts famously said, only to be undertaken if everything else fails.

What’s the question you wish somebody would ask but nobody ever does?

Are the film rights available?

That seems a good place to finish! Thank you, Sarah.
SINS OF THE HOUSE OF BORGIA is available from all good bookshops in the USA and as THE BOOK OF LOVE in the UK.
Sarah is one of the authors featured on the British Babes Book Brigade page on Facebook.

One thought on “Meet Sarah Bower”