A piece of unexpected good news has arrived at Downie Towers – Ruso and Tilla’s first adventure is being translated into Croatian. To celebrate, here’s a view of Croatia’s most famous Roman building, the palace of the emperor Diocletian at Split. 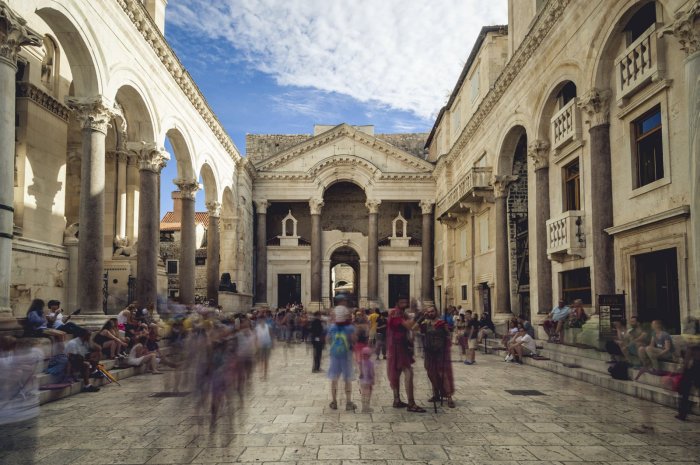 Diocletian was an unusual emperor. Others had commissioned sprawling  extravganzas with vistas and lakes for their personal residences, but Diocletian’s architect must have been told to think very much INSIDE the box. The whole palace fitted into the standard walled rectangle of a Roman fort.

Meanwhile, Diocletian was a man on a mission. He’s chiefly famous not for waging war (although he did) but for his less glamorous attempts to rescue the struggling Empire from chaos by sharing power, re-ordering local government, and trying to crack down on raging inflation and profiteering. His Edict setting maximum prices for goods across the Empire was inspired by his observation that “Greed raves and burns and sets no limits on itself,” and who could argue with that?  You can read the full text of the introduction here, and there’s a video featuring one of the remaining copies of the Edict here.

He also seems to have been a man with a plan. In his sixties and in failing health, he handed over power to his pre-arranged successor, moved back to his native land and – as far as we know – enjoyed a relatively peaceful retirement. Which made him a very unusual Emperor indeed.