Big thanks to Fiona and the staff at the lovely Walter Henry’s bookshop in Bideford, who marked the 400th anniversary of Shakespeare’s death on Saturday with tea and cake and fine hospitality. The collective noun for a gathering of  local readers, writers and historians should probably be ‘a gossip’ but we fell respectfully silent to listen to a sonnet by the late Bard, read by his living namesake, writer Liz Shakespeare.

Peter Christie explained why he believes Shakespeare came to Bideford: we know (I didn’t, but I do now) that the King’s Company came all the way to Barnstaple to flee the plague in 1605, so having travelled that far, surely they would travel down the road and play the only other big town in the area? Whose plays were being watched in contemporary accounts of money being ‘wasted’ on the theatre?

Finally Janet Braund Few entertained us with a demonstration of Elizabethan costume and manners. Something we clearly needed, since several of the wenches present had turned up wearing men’s breeches and in a further assault upon modesty, not one of the married ladies present had her head covered.  We had all, as the saying goes, let our hair down.

Rather than shock any sensitive readers with photographs of this scandalous attire, here is a picture of a bag. 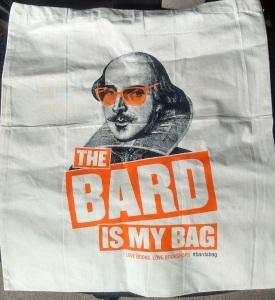 And here’s the book I bought to go inside it, recommended to me by children’s author and farmer (so she should know),   Victoria Eveleigh. 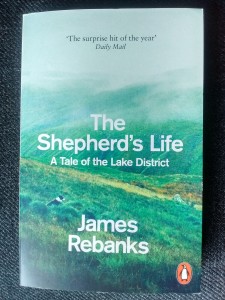