At last! The hardback of VITA BREVIS, the story of Ruso and Tilla’s trip to Rome, goes on sale in the UK tomorrow (22 September).

You can read the beginning here.

This publication is less nerve-wracking than usual because the book’s already been released in the US and in other formats here, and I’m grateful to everyone who’s said kind things about it.  It may well come to a bookshop or library near you, and is available online (see below). But…  the mighty Amazon UK don’t have it in stock. It’s probably a glitch that’ll be fixed before I’ve finished typing this*, but I was surprised – and ashamed, to be honest – by how alarmed I felt at facing publication day without the Big A on board. (*LATER – it wasn’t, but it is now.)

All of which left me thinking that life must have been so much simpler in the days when a book was either on the shelf in front of you, or it wasn’t. So I took a little look back to the early 1900’s, when one small seaside resort in Devon could support FIVE circulating libraries/bookshops, all competing for the cash of locals and visitors alike:

As each library was run on a subscription basis, readers would have to choose between them. (Maybe things weren’t as different then as we imagine. It’s not so far from the Netflix/Prime/Other-subscriptions-are-available debate, is it?) There’s a refreshing honesty about the advertising, though:

Perhaps the deciding factor would be price.

Hm. Shall I buy a year’s access to Class A books, or nine gallons of stout? 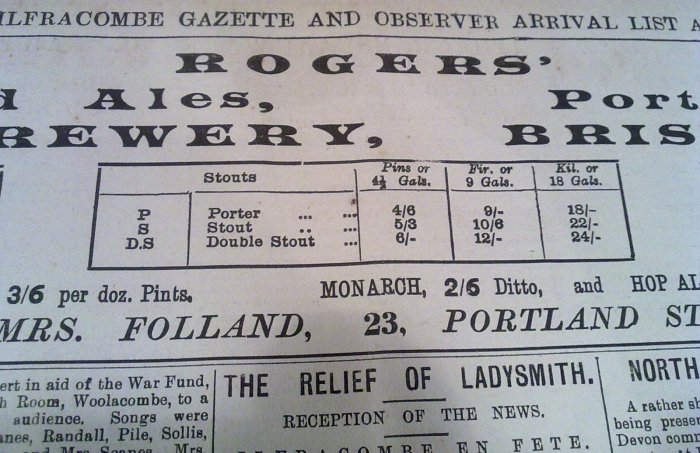 Rather than commit to a subscription, you could always buy books outright from the same shop.

Some of the books on sale would be published on the premises. Indeed, should you wish to write your own book, pens and paper would be readily available to purchase. Sadly delivery by drone was not on offer, but someone from Vince’s would obligingly wheel your books through the streets to you in a splendid wooden hand-cart. (I used to have a photo of this but annoyingly, I can’t find it.)

Full marks to Vince’s yet again for imaginative marketing…

I have no idea why enough people might want a paper hat to warrant the cost of the advertisement. Maybe they were sunning themselves on the beaches? It’s a reminder that despite the parallels, those were very different times. Here’s an advertisement from the autumn of 1914.

I like to think we’ve moved on. And mindful of the awful events about to engulf the readers of these advertisements, I think I’ve got that mere hiccup on a 21st century website back into some sort of proportion.

The research for this post was done at the delightful Ilfracombe Museum.

* VITA BREVIS is available from bookshops or online at:

Blackwells (who also own Heffers in Cambridge, where I believe there is stock on the shelf.)

8 thoughts on “VITA BREVIS is (almost) out in the UK!”