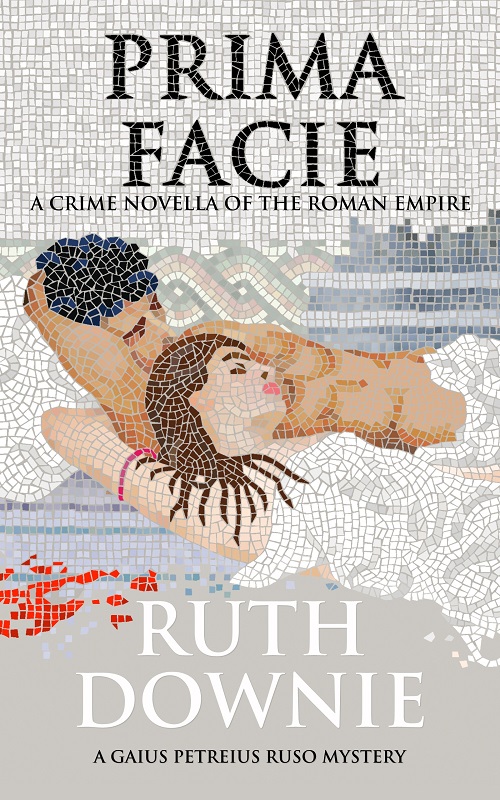 Many thanks to the patient friends of Ruso and Tilla who’ve been in touch to ask how – and indeed what – they’re doing.

Occasionally I get emails asking what happened in between the novels. Usually the answer is ‘not much’, which is why there isn’t a book about it. However… some people wondered whether Ruso and Tilla might have called in on Ruso’s family in Gaul after they left Rome at the end of VITA BREVIS.

And so PRIMA FACIE, a novella telling the story of that visit, was born. As with the full-length novels, you don’t have to have read any of the other books to make sense of it. Although if you have, you’ll be meeting some familiar faces.

Here’s the blurb from the back cover:

A tale of murder, intrigue, and betrayal in Roman Gaul.

It’s AD123 and the sun is shining on Southern Gaul. Ex-military medic Ruso and his British wife Tilla are back after a long absence – but it’s not the reunion anyone had hoped for.

Ruso’s brother has left him in charge of a farm he has no idea how to manage, a chronic debt problem and a gaggle of accident-prone small children. Meanwhile his sister Flora has run away to rescue her boyfriend, who’s accused of murdering a wealthy guest at a party.

Can Ruso and Tilla save the boyfriend from the murder charge – or should they be saving Flora from the boyfriend? Will any of the guests tell the truth about the fatal party before it’s too late? And how long can Ruso continue to lie about what’s inside the bath house?

…or you can pre-order the Kindle ebook here in the UK, or here if you shop on Amazon.com.

Before you ask – I’ll apologise now to folks who prefer their books in audio. Sadly novella-length books (this one is about a third the length of a full novel) aren’t something that audio publishers are clamouring for. Well, mine aren’t. If that changes, there will be dancing and celebration at Downie Towers and when I’ve recovered, I’ll post the details (about the audio, not the dancing) here and everywhere else I can find on the Internet.

17 thoughts on “They’re back! A new MEDICUS novella on 9 July”